Latest data from the International Alliance for Responsible Drinking (IARD) confirms Australia is increasingly a country of moderate drinkers, with heavy episodic drinking at its lowest level since 2001.

The report, to be released by IARD on Monday 30th September, shows binge drinking is on the decline in Australia, with only 25.5% (29.5% in 2004) of people drinking more than 40 g of alcohol – equivalent to three bottles of full strength beer, or three 150ml glasses of wine, or four nips of spirits on one occasion.

“More work is still needed, but the evidence clearly shows Australians are turning their back on binge drinking, and moderation is the new norm,” says Andrew Wilsmore, CEO of Alcohol Beverages Australia. “The real issue, however, is the perception that binge drinking is on the increase.”

“Perception is often regarded as reality, and these views might be encouraging Governments to further regulate what is already one of the most strictly regulated and highest taxed alcohol industries in the world.”

“We know from ABS statistics that overall drinking has declined in the last 50 years and this report is yet another example of how well Australians are responding to messages about the importance of enjoying alcohol in moderation,” says Wilsmore

“The regulatory settings in Australia are some of the harshest in the world and no longer in touch with the Australian lifestyle – where drinking in moderation is the new norm.”

“Targeted solutions are needed for the remaining small percentage of the population who continue to drink at high-risk, but it’s well past time for Governments to give the vast majority of responsible drinkers a fair-go and start rewarding them with similar freedoms enjoyed in many other parts of the world. 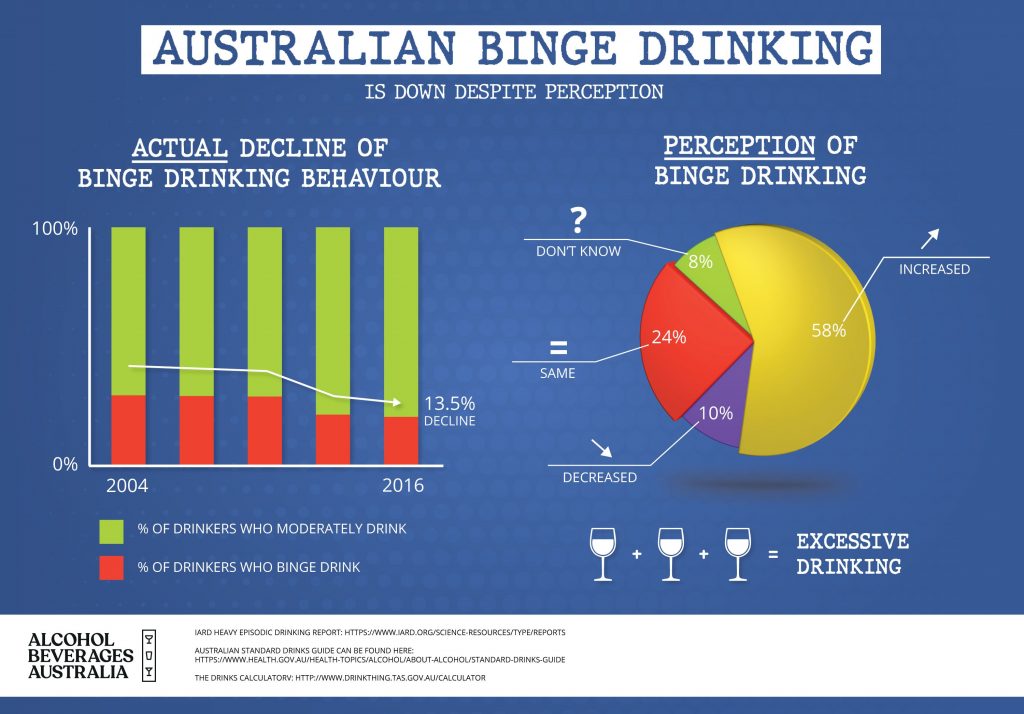 • Australia’s drinking guidelines are amongst the strictest in the OECD with “binge drinking” defined as more than four standard drinks (40g) on one occasion at least once a month in the past 12 months. Most other countries define heavy episodic drinking as being more than 60-70g on one occasion.
• Australians pay some of the highest tax on alcohol in the world.